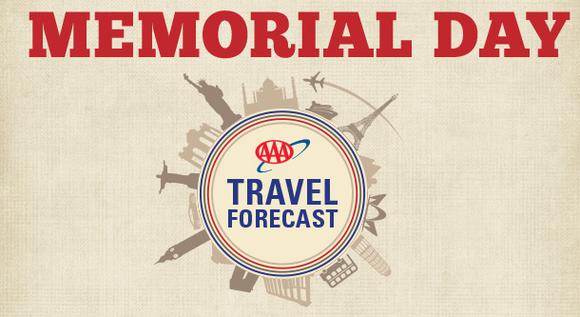 Memorial Day is here, and it’s once again time for our annual(ish) look on what the unofficial kickoff to summer means in terms of economic trends, etc.

And if you’re about to head out the door, to either hit the road, the beach, or an unacceptably long TSA line, we’ll give you the short answer to scan on your phone:

The summer trendline is good.

As one Florida-based paper put it, anticipating an influx of tourists, “low gas prices throughout the year mean many families have more expendable income, making them more inclined to travel this summer….When gas prices are low, it puts more take-home pay in people’s pocket.”

And in turn, use more “discretionary” income for those road trips.

The Christian Science Monitor goes even further: “with summertime gas prices predicted to be the lowest in 13 years, the travel industry is looking forward to a blockbuster July and August.

“The job market is also giving Americans a reason to take a vacation: The economy created about 2.4 million jobs between last Memorial Day and the end of April. Initial data for the Memorial Day holiday weekend, the start of the travel season, is already signaling a strong summer for the tourism industry.”

Though maybe it won’t involve those TSA lines, after all. According to AAA, “the overwhelming majority of Memorial Day travelers – 89 percent – plan to go by car.” The car advocacy and travel group “is predicting 38 million people will travel for the holiday, the most since 2005. That’s 700,000 or 1.9 percent more travelers than last year (and) the highest percent of drivers since AAA began tracking holiday travel in 2000.” What does this mean for you and your customers, even if you’re not running a crab shack on a Florida beach?

Well, it means that during the season, they’re even more a “spending mood” than they might be otherwise. Factor in graduations, weddings, and other seasonal celebrations, and it can become another “holiday season” in terms of outlook, even if the span discussed is Memorial Day – 4th of July – Labor Day, rather than fall’s Halloween/ Thanksgiving/Xmas axis.

Though according to a survey at CreditCards.com, only 15 percent of Americans said they were going to put their upcoming vacations on credit cards. A
surprising 13 percent said they were planning to pay for their vacations with “rewards,” meaning they’ve already been using their cards in advance.

But for the rest, paying cash, does that mean they’ll be traveling with bulging wallets and reverting to Travelers’ Checks?

It does not. It simply means they’ll be using debit cards, instead.

Which means all of them will have to be that much more careful that their direct-to-account information doesn’t get hacked, via skimmers, non-EMV upgraded POS terminals, and more.

For anyone either gearing up for the road at your business, coming into your store, or just enjoying their “staycations” while buying from, make sure their charge card “travels” — whether credit or debit — are as safe as can be.  And here at AVPS, we’ll be here to help you do that. Even if you’re out and about on the road…!