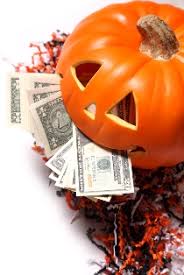 The Boston Globe says it succinctly: “Consumers may still be holding tight to their wallets after the recession, but there’s at least one occasion that doesn’t appear to have them spooked: Halloween.”

The article quotes Kathy Grannis, from the National Retail Federation:  ‘‘There was a time when mom and dad simply put their child in a costume and helped them trick-or-treat. And now, parents are wearing their own costumes and throwing parties; they’re dressing as their favorite ‘Breaking Bad’ or ‘Game of Thrones’ characters.’’

And perhaps tapping into their inner Walter White or Tyrion Lannister will actually put those same moms and dads into better holiday spirits overall: “An uptick in spending at Halloween could provide retailers with reason for optimism,” the article notes. “A willingness to spend more on Halloween could be a signal that consumers won’t be pinching pennies at Christmas time. The federation has predicted that holiday sales growth will rise 4.1 percent this year, a relatively upbeat forecast that would be an improvement on last year’s growth.”

In the same inintial vein, an article on Pymnts.com says “Surveys are predicting more shoppers in the malls this holiday season and a 4.1 percent rise in holiday spending. That’s the good news.” But then it lists the not-so-good news: “Once again, such surveys don’t predict margin and if those shoppers gravitate only to the lowest margined items, a retail CFO’s Christmas may be markedly less merry.”

The article quotes a Bloomberg report which says “More shoppers are demanding additional perks from physical chains, which is going to hurt margins.”

“Consumers frequently look for deep discounts before making a purchase, and they already know what they want ahead of time.” By way of such perks the article notes that Target is “offering free shipping on orders  for the first time. And Toys’R’ Us Inc. sweetened its loyalty program, offering as much as $10 for every $125 that shoppers spend.”

So recession-hardened consumers, even when they can spend again, are still looking for the best deals they can find.

As we head into the high season of holiday shopping, see what perks and extras you can offer your own customers.

Some of those might be the “perks” of expanded payment options. Another Pymnts article quotes the Fed, which declares that “Cash is Finally Dying.”  A report from the Federal Reserve Bank of Boston “shows a drop in cash usage and a continuation of the popularity of debit cards, although a shift back to credit cards was evident.”

“The report also examined nonbank accounts (PayPal, Amazon Payments and others) and found, not surprisingly, that their numbers are increasing rather sharply.”

In short, then, even customers in a holiday mood want good value, service, and maximum payment options! Make sure you’re as mobile and as eCommerce-ready as you can be, for this season, and the ones beyond. And don’t forget holidays also mean cards — in this case, prepaid and gift cards!

AVPS is ready! No tricks! Just our usual customer service “treats” to keep your payments humming along!