As we hit the midpoint between the Black-and-Cyber shopping weekend, and the big event of Christmas itself, with Hanukkah now behind us and New Year’s (and the post-holiday sales!) still ahead, a few trends seem to be, well, distinctly trending, during this time of cold snaps and hot cocoa.

For one thing, consumers seem mostly jolly, according to the National Retail Federation:  “Sales in November… increased 0.5 percent seasonally adjusted over the previous month and 3.0 percent unadjusted year-over-year.” One reason for this general ho-ho-ho attitude toward spending is that “consumers right now are getting great value for significantly less this holiday season given the deflationary environment that continues to impact overall trends in spending.”

So when the spending goes farther, people seem willing to do more of it. And we’re not done with all the various named shopping days of the season yet, either, as the same NRF article notes that this past Monday was “Green Monday –typically the busiest day for delivery services and the U.S. Postal Service.” It was also another day for sellers to bring back many of the online specials they advertised on both Black Friday and Cyber Monday.

Though increasingly, the distinction between the “cyber” and “non-cyber” parts of the holiday season is diminishing. As a recent roundtable on the Motley Fool website, covering these trends, noted,  “40% of that online shopping (is) taking place on smartphones and I think another, like, 10% to 15% (is) happening on tablets. So that’s just I think partially from smartphones are bigger, the screens are bigger, it’s easier to navigate and shop with them now. So their prominence and use among shoppers is growing. And the thing is, I think, to keep in mind is that Thanksgiving, Black Friday, Cyber Monday, we used to consider this stuff the beginning of the holiday shopping season. It’s more like halftime now.”

But getting through those first two quarters, then, may have gone a little slower, than expected, as NBC headline states that “Few Retailers Accepting ‘Chip’ Credit Card Payment Feature for Holidays.” 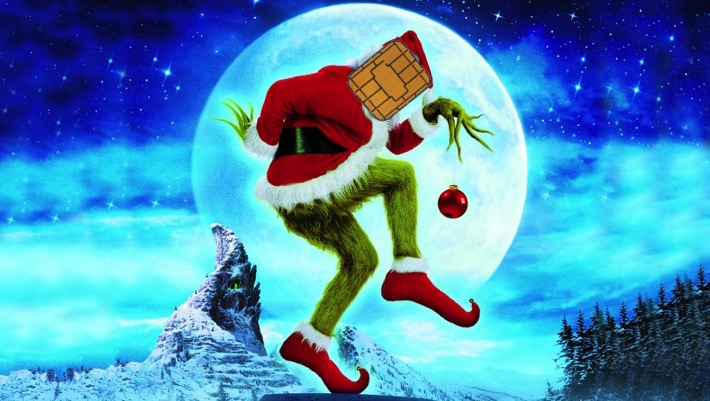 Of 8 national and regional chains surveyed, they “found that only one in four had payment terminals able to process a purchase using the chip security feature in the EMV cards (an acronym derived from Europay, MasterCard and Visa, the three companies that originally developed the standard). ‘Virtually all – except for Radio Shack – have installed checkout terminals with the card slots for these chip cards, but most of them did not work. They had not turned on the system yet.’

That’s a surprising list, and one hopes that January or February won’t bring the first post-holiday news of the next big breach.

Your business, of course, can leapfrog all these national brands by contacting your AVPS rep if you haven’t made the EMV upgrade yet. It’s not only more cost-effective for you — since you won’t be liable for any fraud — but it meets your shoppers where they are, especially when they’re offline and in your business!

And when they’re buying from you using those tablets or smartphones, you can upgrade your checkout and online systems as well, to make things faster and more secure, regardless of which “quarter” we’re in for holiday spending.

Or regardless of which year we’re in! After all, a new one is ‘right around the corner!