The True Cost of Fraud — And the Future Beyond Cards 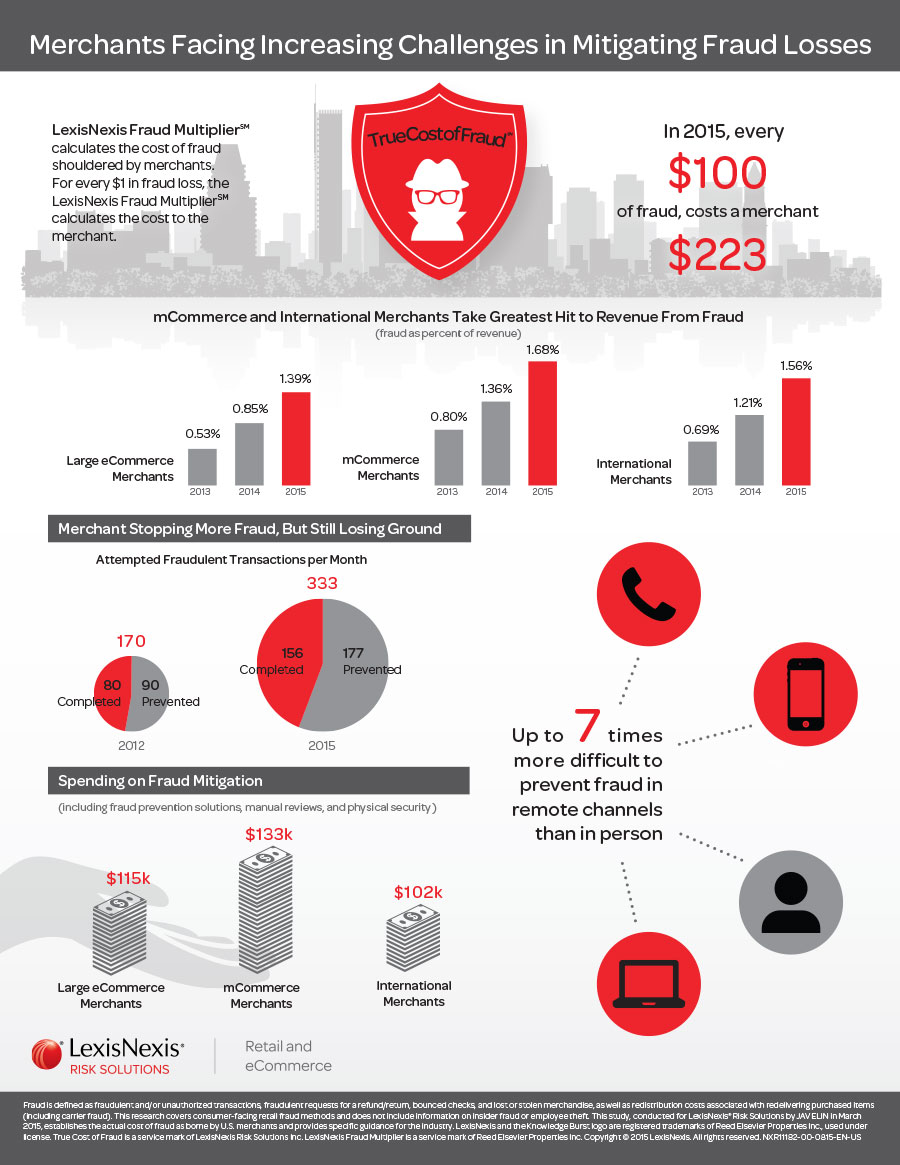 We are at a kind of “nexus” in the world of payments already — between the old and the new, the secure and the not-so-secure, the wired and the wireless.

So it may well be fitting that LexisNexis — that noted online legal and analytic database (which spells the “Nexus” part differently, but nonetheless…) — has come out with its annual report, and infographic, on “The True Cost of Fraud,” in this case, for the year we’re wrapping up (already!) in 2015.

Among the latest findings:

And according to industry newsletter Green Sheet’s summation of the findings, “the LexisNexis report…revealed a recent surge in debit card fraud, suggesting that crooks are making last-ditch efforts to use stolen card data in the runup to widespread Euorpay, MasterCard and Visa (EMV) implementation in the United States. Merchants accepting debit cards attribute 30 percent of fraud in 2015 to stolen card numbers; in 2014 it was only 16 percent… ‘Consistent with merchant trends, financial institutions agree that debit card fraud is a growing challenge facing their industry,’ LexisNexis reported.”

As for that run up — and now conversion to — that aforementioned EMV standard, while the U.S. is still in the throes of the switchover, tech website The Verge reports that, already looking past our immediate EMV futures, “MasterCard wants to turn every gadget into a credit card.”

“MasterCard,” the article states “wants to let every new gadget turn into a credit card.” It’s doing this with the launch of a program “that’ll allow tech companies to make gadgets like smart rings, car keys, and fitness trackers that can also be used to make credit card payments in stores, just like most new smartphones can with programs like Apple Pay and Android Pay. MasterCard is starting out with a few partners, who have already put together prototype units. GM has made a key fob with MasterCard’s wireless payments tech built in; Ringly has done the same with a version of its smart ring; and Nymi has created a smart wristband.”

The ultimate aim of course is to make paying with your credit account — the “card” part becoming ever more vestigial — “as easy as possible. Rather than needing to have a specific device on you and at the ready, MasterCard wants you to simply swipe the keys that are already in your hand or the ring that’s already on your finger. In doing so, it’s starting to get ahead of the boom in connected gadgets.”

But as we’ve seen with the LexisNexis graphic, if this “internet of things” gets us deeper into mCommerce, beyond even our regular “eCommerce” rounds, then what new opportunities for fraud and hackery?

Those hacking, and those protecting, will be kept busy for awhile. For the time being, it may be just as well that your refrigerator isn’t tied to your bank accounts. Yet.

Still, the future doesn’t have to be viewed as only a “dread verge” (so to speak). Your AVPS rep can help ease you into the payment future that’s unfolding anyway, with upgrades, updates, and new ways to help your customers play — and pay — safely.

Meanwhile, see you in a week — 7 more days into our future!