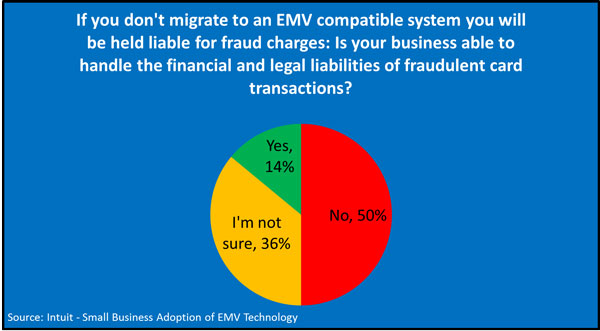 An array of studies reveal interesting new “market metrics” for the economy, at least from the payment card side of the equation.

Visa revenue in Europe is up 25% — to an all time high, as Pymnts.com reports.  Visa Europe is merging with its parent company — that’d be the Visa we use for payments here in the U.S. — and reports “that it had its most successful year ever in terms of revenue growth.”

The company says that it now “has scale enough that its business accounts for €1 in every €5.70 spent in Europe.” Nearly 20% of all transactions! So in contrast to other roiling economic indicators of late — like the markets — use of payment cards keeps growing.

Meaning, you make yourself available to more and more customers when you keep up with the different kinds of payment technologies they want to use.

Which includes, of course, more secure cards. Payment Week says that “the shift to EMV is helping to address vulnerabilities in the United States payments ecosystem due to the fact that most other countries migrated to chip technology prior to the U.S.”

Other countries like those, for example, where Visa Europe is experiencing such explosive growth! It stands to reason that the safer customers feel about types of electronic payments, the more they’ll use those payments.

“From the impacts we have observed in other countries as they have implemented EMV technology, we know that EMV helps reduce fraud at point-of-sale,” Payment Week states quoting Ellie Smith, Head of the Discover Chip Center of Excellence. “This makes the U.S. EMV migration a critical focus for enhancing payments security, which is why the current efforts around chip card deployment are greatly beneficial for consumers and merchants alike.”

Which merchant benefits? “Overall, the U.S. retail payments system, which has been relatively stable for decades, is undergoing some significant positive changes. When merchants continue to invest in EMV and NFC (near field communications, used for tap-and-pay transactions), the purchases made at their EMV-enabled terminals are made more secure than magnetic stripe. New mobile payment options such as mobile wallets support EMV and therefore offer this added layer of security.”

EMV also positions you, in other words, to be ready for all the additional changes and platforms that are coming in payments, changes that AVPS will also help support and supplement.

And after all, Marketwatch has a report from payment industry group The Nilson Report, saying  that global card fraud losses are currently reaching $16.31 Billion and “ will exceed $35 billion in 2020.”

That’s a lot of fraud. “Fraud losses occurred from counterfeiting, card not present (CNP), fraudulent application, lost & stolen, card not received, and other much smaller categories,” the report notes.

By being EMV-ready, you can help eliminate those first two categories. Why, you can be practically… European, in your sophistication. Just like those Visa folks!

And just like your customers, with all their new payment platforms and secure cards — that they want to use to pay you with!

Be ready. And let AVPS help. See you in February!