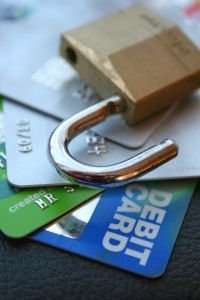 By way of a heads-up comes this news from Canada, and reported in the northerly edition of Huffington Post (and later picked up in Forbes’ credit card “round up” column). We’ve mentioned those embedded chips that are due to replace magnetic strips on most credit cards (and have to a large extent in Europe — where the upgraded plastic is the “EMV” standard we’ve written about here before).

Now, think of those smartphone commercials you’ve seen where phones can be “tapped” together to exchange information. Now put that “tapping” ability in a scarier context, and think of it brushing against one of those chips on a card.

That’s right. The information from the card can be picked up from the phone.

It’s not that there’s a rash of this yet, or that you have to carry your credit cards in a lead case (or encourage your customers to do liekwise), but put this on your map as a thing to be aware of: In Canada, CBC news was able to use a Samsung Galaxy 3, and an Android app from the Galaxy Play store, to read credit card info including name, expiration date, and of course, cardholder. As the article notes, the “information could be read through wallets, pockets and purses.”

Of course, somebody would have to pretty close to your pocket — the transmitting is done through the atenna used for “Near Field Communication,” or NFC, that makes that “tapping” possible. And while only certain models of Android phones have such tapping ability, the upcoming Galaxy 4 will make that “near” field a little farther than it is already.

Apparently, such fraud is more commonplace in Europe, where such card chips are themselves more widespread, and it’s unclear, at the moment, what either phone or app makers, or the card issuers themselves, are going to do to combat this problem while it’s still in its early stages.

If you’re an online merchant, or thinking of upgrading to allow “virtual wallet” use in your offline store, or any other kind of payment where numbers simply need to be typed in or transmitted, make sure all your security protocols are updated, and that you stay in regular touch with your AVPS rep about security measures and upgrades. And we’ll continue to keep you updated here on our blog.

We are wondering about the efficacy of lead-lined pockets in our summer chinos, though.